What is the Flick prediction?

The Flick prediction is only available for roast machines able to track Gas automatically via the RI.

If your roast machine is able to track the "Gas" measurement automatically, the measurement must be set up from the RI's Machine preferences before you are able to activate the Flick prediction.

Learn more about Using Smart predictions and how to turn them on/off.

What is the "Flick"?

The Flick is a rise in the Bean temperature RoR at the end of a roast (usually after 16% of development time) and usually follows a RoR crash (but not always). The Flick adds a layer of roasty flavor to a batch; the larger the Flick is, the greater the effects are on the batch.

The Flick indicates an acceleration in the Bean temperature RoR, and several factors may contribute to it, such as a crash in the RoR early in the first crack, drying of the beans, and/or overheating of the roasting environment.

Predicting the Flick early enough to take countermeasures to avoid it would have a huge impact on roasting quality, as a roast with a flick will taste more roasted, and less delicate than a similar roast without a flick.

Learn more about the flick from our blog post by Scott Rao.

In a typical 10 - 14 minute roast, the Flick occurs approximately 90-120 seconds after the onset of first crack. Usually when you see the Flick in the RoR, it is already too late to take a counter action.

To prevent a Flick, Scott Rao recommends lowering the gas between 12% and 16% Development Time Ratio (DTR).

To prevent an RoR crash, the gas should not be lowered between 0% and 12% DTR. These gas changes could give a roaster an additional indication if a RoR crash, or a flick, are likely to occur.

A flick most likely happens if:

How does Flick Prediction work?

Note: A flick can be influenced by gas management around the first crack. For this reason, First crack prediction must also be activated before you can enable Flick prediction.

Two minutes before the First crack, or after (whenever the prediction detects that the flick might happen), Roasting Intelligence (RI) prompts a modal on the roasting chart to alert you about the flick's possibility during the roast (i.e. Flick possibility detected). 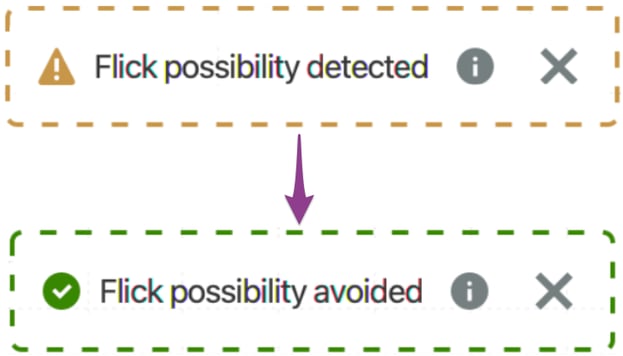 You are now ready to roast using our Flick prediction!

Thanks for being a Cropster customer! If you have feedback, questions, or concerns, please feel free to send it to your representative or directly via support.cropster.com.

We design and make alterations to our software based on user feedback, so we look forward to seeing what you have to say!